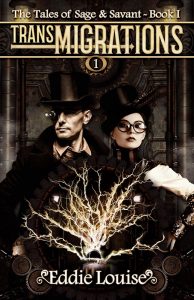 Trade Paperback
Mad science? Obsession? Folly?
Telesensation agent Justin Bremer studies ‘time’ – specifically the effects of journeying through it.
His assignment, funded by a mysterious organization, ‘Les Charges de L’Affaires,’is to observe the ‘timeline’ of a young Victorian scientist who lived approximately 2000 years in the past. Equipped with an AI neural-interface, Bremer carefully documents the experiments of Dr. Petronella Sage and her archeologist friend Erasmus Savant. The Doctor, investigating the effects of electricity on human flesh becomes obsessed by the curious and vivid shared hallucination induced after she and Savant are accidentally electrocuted. Each hallucinatory adventure (which they call a ‘Transmigration’) takes the intrepid duo into the unimaginable lives of persons and places throughout history. Justin observes and dutifully records it all.

Uncover the secrets of ‘transmigration’ in this steampunk adventure like no other. 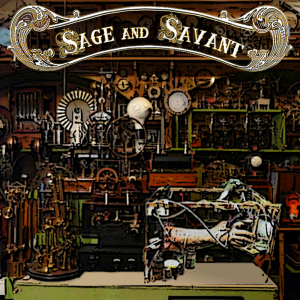 The Tales of Sage and Savant

The Tales of Sage and Savant is a monthly audio-drama podcast set in an alternate history Steampunk universe. Steampunk is a retro-futuristic imagining a sci-fi future starting from a Victorian past. Sage and Savant exists in a sci-fi universe, which allows the podcast to investigate modern concepts and ideals. The combination of modern ideas and formalized vocabulary help to establish an other-worldly setting for our story.

The lead character, Doctor Petronella Sage is angling to become a fellow at King’s College, a fictional university lauded for its Medical and Historical Science Departments. Although Petra has achieved her doctorate and a position at university, she is constrained by official views on her capabilities. Though women in our story have the vote, much like in our own time, they still lag in recognition (and pay) for their scientific and academic successes. Doctor Sage is under immense pressure to perform perfectly and to bring credit to the institution before she has any hope of achieving her goal of becoming a fellow.

© 2016 All Rights Reserved | Powered by Wordpress | Made with ❤ by Themely